Kharissa and Wesley Forte were once on the verge of divorce.

But after deciding to give their relationship a final push, the two went to counseling. The experience was revelatory, they said, noting it ultimately prompted them to create their own online media company — Grace & Grind — to share lessons and their story with others.

“What we learned was that neither of us had a solid understanding or a good relationship with self-care,” said Kharissa Forte, CEO and editor-in-chief at Grace & Grind. “But during that time, we basically had to learn how to balance our individuality with the us and who we are as a couple, and recognize the beauty and the boundaries in both of those areas.”

A year later, the company focuses its content on self-care through an online publication, podcast and shop. The Fortes also offer advertising and writing services to other wellness brands. Their content caters to a national audience, but they also keep a focus on Kansas City.

“We just believe that self-care is the most selfless thing that you can do and our goal is to help our readers keep their cups full,” explained Kharissa Forte, who already has built a storied career in journalism and media.

The podcast (which features both Kharissa and Wesley) and online publication discuss a variety of topics — from food and fitness to healthy sleep habits to mental health. For Grace & Grind’s advertising services, they offer four options: static ads, podcast commercials, influencer marketing and written articles.

The newest development: an online shop selling products like apparel and herbal blends.

Grace & Grind initially offered digital marketing services — including website design and social media content, which helped sustain their business in its early months — but is currently pivoting away from them.

As a Black- and female-owned organization, the duo is intentional about representing the Black community, Forte said, noting that doesn’t stop the brand from being a resource for others.

“It’s for the Black community at large,” she said. “It’s for people who aren’t Black, but who want to be allies and can still gain so much from the articles and content that we create. It’s for Black people who grew up in affluent communities and can’t relate to some of those things either just because of their socioeconomic status. Grace & Grind definitely touches on or speaks to a few different groups of people who all at the end of the day help to uplift the Black community.”

With the pandemic bringing a new focus to health, Forte said, Grace & Grind’s focus on self-care and support for the Black community differentiates it from other health media outlets.

“I realized that I had to make the decision to either regurgitate the same news stories and the same statistics that everyone else is talking about — all important information — or Grace & Grind could be the platform where people learn to sift through it,” she said.

The brand further differentiates itself by touching on spirituality, a topic Forte said she doesn’t often see in other health businesses and publications.

Such conversations can include topics like mindfulness, meditation and confidence.

“We believe that spirituality — which is different from religion — but spirituality in and of itself, is part of our health and wellness journey,” she said.

For Grace & Grind writers Sydney Jones and Sophie Oswald, the Fortes built a work environment that is based on the stories of health and self-care they publish.

Grace & Grind’s commitment to representing the Black community, as well as the LGBTQ+ community, resonates for Oswald, she said.

Along with growing the online shop and developing a subscription model for Grace & Grind, Kharissa Forte hopes to begin publishing quarterly print versions of the magazine in summer 2023.

Her past work in journalism and digital marketing after all allowed her to build Grace & Grind into what it is today, she said.

“When I look back over all of my experiences that I had — in radio, the little bit of TV that I did, working for newspapers, learning how to build websites and do social media — I’m like, wow, all of those jobs were really internships for Grace & Grind,” Forte said.

The Fortes have now been married for 10 years.

Working on the podcast with her husband is Forte’s favorite element of Grace & Grind — an ongoing project that has continued to improve their marriage.

“As I build this business, it’s not just a brand for me anymore. I definitely feel like it’s my calling,” Forte said.

This story is possible thanks to support from the Ewing Marion Kauffman Foundation, a private, nonpartisan foundation that works together with communities in education and entrepreneurship to create uncommon solutions and empower people to shape their futures and be successful.

Sat Sep 11 , 2021
LONDON, Sept 9 (Reuters) – Sky-high valuations and signs that the flood of cheap cash washing around financial markets may be subsiding suggest the record-breaking run in shares is about to hit the buffers. Banks including BofA, Morgan Stanley, Citi and Credit Suisse this week told clients to trim exposure […] 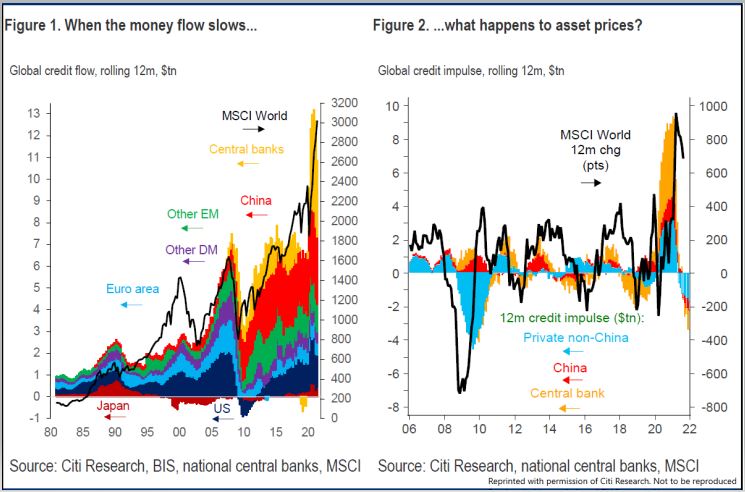