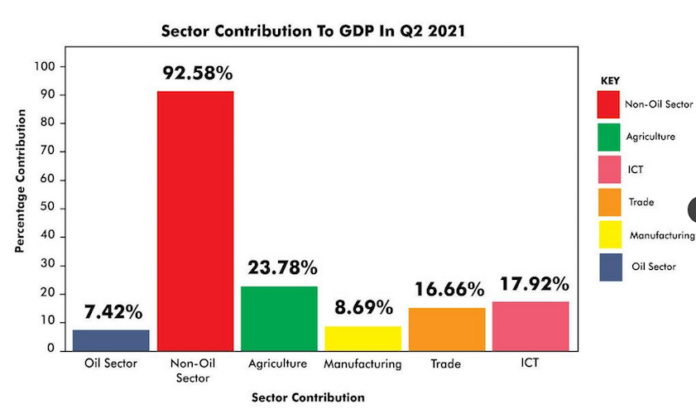 As investors continue to bet on the nation’s as Agriculture and the Information and Communications Technology (ICT) sectors, it has emerged that the sectors contributed the most, to accelerate Nigeria’s Gross Domestic Product (GDP) by 5.01 per cent in second quarter 2021, the highest quarterly growth since 2014.

The recent statistics on the 5.01 per cent jump in GDP in second quarter (Q2) of 2021 released by the National Bureau of Statistics (NBS), showed that both sectors led the non-oil sector to drive the growth in GDP.
Specifically, the ICT sector has since the ease in Covid-19 lockdown witnessed massive outlay of investment in tech startups raking in about $500 million.

According to the NBS numbers, while agriculture, which is a combination of Manufacturing and Trade, contributed 23.78 per cent to GDP during the period, the Information and Communications Technology (ICT) sector alone, contributed 17.92 within the same period, its highest ever contribution to Nigeria’s GDP.

This, according to NBC, marked three consecutive quarters of growth following the negative growth rates of -6.10 per cent and -3.62 per cent in Q2 2020 and Q3 2020 year-on-year respectively.

Giving insight to ICT contribution to GDP, the Minister of Communications and Digital Economy, Dr. Isa Ibrahim Pantami, said the ICT sector contributed 17.92 per cent to the total real GDP in Q2 2021, 20.54 per cent higher than its contribution a year earlier and in the preceding quarter, in which it accounted for 14.91 per cent, adding that it is the highest contribution ever of ICT to Nigeria’s GDP.

Pantami said this in a statement released by his Technical Assistant on Information Technology, Dr. Femi Adeluyi. According to Pantami, “The growing contribution of the ICT sector to the GDP is as a result of the commitment of the administration of President Muhammadu Buhari, to the development of the digital economy. The 16 National Policies developed by the ministry, the 1,667 projects and programmes, the large scale digital skills and general capacity building efforts, stakeholder engagement and creation of an enabling environment, have all played an important role in this achievement.”

He added, “The support of President Buhari has contributed immensely to the impressive developments in the sector. The unprecedented contribution of ICT to Nigeria’s GDP can also be attributed to the dynamic and results-oriented leadership of the sector, which has been acknowledged and appreciated by a wide spectrum of the stakeholders in the sector, both locally and internationally.”

Pantami said the Secretary General of the International Telecommunications Union (ITU), Mr. Houlin Zhao, had commended him for Nigeria’s accelerated digital transformation. He also said the Chairman of the United States-Nigeria Council (USNC), also commended him for the commitment to diversifying Nigeria’s great economy through digital technology and innovation.

Pantami further said the recent GDP report showed how critical the ICT sector is to the growth of Nigeria’s digital economy and, by extension, the general economy. The minister therefore called on all other sectors of the economy to take advantage of the federal government’s new focus on the digital economy to enable and improve their processes through the use of ICTs, which he said, would enhance the output of all the sectors of the economy and further boost Nigeria’s GDP.

Industry analysts have however attributed the GDP performance to some interventions put together by the federal government to reposition the economy after the devastating effects of the COVID-19 pandemic.

The analysts however noted that the GDP growth does not necessarily indicate that the challenges confronting the economy were over.

President of Bank Directors Association of Nigeria, Mustafa Chike-Obi, said although government policies and incentives have helped in growing Nigeria’s GDP, he however said it was unlikely that Nigeria would sustain the 5.01 per cent growth without significant expansion of the country’s policies. He advised government to invest more in infrastructure rather than focusing so much on revenue drive, which he said could impact the economy negatively. He insisted that the federal government must expand its policies and invest more in infrastructure in order to surpass the 5.01 per cent GDP growth, to reach double digit growth rate.

Fri Sep 3 , 2021
DENVER, Aug. 25, 2021 /PRNewswire/ — BNY Mellon Wealth Management named Gary Lutz as Regional Director, West Region Private Banking. In this role, he oversees banking and lending services for individuals, entrepreneurs, and endowments and foundations. He is based in Denver and reports to Rick Calero, head of banking and […]